* Establish a clinic for FTD sufferers

WOW.  I thought I had lost this blog.  This blog was so important to me....it was a connection to other families dealing with Frontal Lobe Dementias.  I have learned so much since I first started this journey in early 2000.

I look forward to getting back on here and sharing the journey.

Recently we produced a research conference here in San Antonio, Texas.  It was very encouraging...seeing doctors share their research with other groups and offer to collaborate.

http://www.ftlda.org
Posted by Terri at 6:21 PM No comments:

I kept this BLOG up because it put me in touch with wonderful people around the world also faced with the challenges of FTD.  I am proud to say we have come a long way in trying to make a difference.  We formed FTLDA and the reason we went with Frontotemporal Lobar Degeneration Association is because it is an umbrella term for diseases related to the same area of the brain.  As doctors talk about FTD, invaribly they have to talk about Picks, Progressive Aphasia, Semantic Dementia, and Early onset Alzhiemer's.  We wanted to be inclusive and since there are so many similarieties and diagnosis can be difficult we thought it made sense to include them in our mission to promote education and research.

We have worked on our website   http://www.ftlda.org/  it is looking great.  We really are more of a clinical site, hoping to attract physicians and nurses.

We need your support, financially and morally!  Please pass the word, tell your family, friends and doctors about us and our mission. 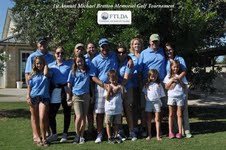 Here is a group shot after our first Michael Bratton Memorial Golf Tournament in 2011.  Some of Michael and Patsy's children with their babys.  These baby's are what inspire me!  November 2, 2012 is the next tournament.  Please tell your friends.....
Posted by Terri at 4:28 PM 1 comment:

Well it has been some time since I was last blogging about our activities. It is hard to believe in just the last few months, our organization has secured an office, produced a charity golf tournament, and hosted a program about FTD for Mind Science Foundation in San Antonio.

It has taken some time to get here, but it is all falling into place.

It is so rewarding when you attend a seminar and doctors come up to you and thank you for making a program like this available. WOW pretty awesome.

We have a long way to go. So much to do...so we will keep pushing forward thanks to so many friends and family.

Everyone that has given money to this organization have help to make this happen. YOU ARE SO APPRECIATED and you are helping to make a difference.

Today would have been my sister Patsy's 62 birthday...still hard for me to believe she passed away at 55 years. So young. I am older than that now.

Thank you all for your emotional and financial support to make this happen.

I plan to get back to blogging...to share my stories and other family stories. Please if you have something to share, share it.
Posted by Terri at 12:35 PM No comments:

Here is a preview of the documentary. Go to the link http://soncountry.net/media/hope/ and enter the password: ftd2010
Posted by Terri at 2:24 PM No comments:

I attended the conference in Indianapolis this past week. The program was packed from 8am until 5 and then you had an opportunity to mingle with the researchers and doctors working on the genetics of these diseases. Wow, I now realize how little I really know.

So few people know anything about frontotemporal dementia and it remains a mystery to most. It often strikes people in the prime of their life as it did my brother and sister. Families suffer along with the patients due to the lack of diagnosis.

You will be hearing more about FUS a new gene identified in 2009. I first heard about this gene from Dr. Paul Schulz, at the Colorado premier of "Planning For Hope".

Dr. Bernardino Ghetti, President of the FTD 2010 Conference put together an amazing program. There were 22 countries represented at the conference. The next conference will be in 2012 in England.

If you have a family member and are interested in participating in a clinical trial...go to http://www.clinicaltrial.gov/ ClinicalTrials.gov is a registry of federally and privately supported clinical trials conducted in the United States and around the world. ClinicalTrials.gov gives you information about a trial's purpose, who may participate, locations, and phone numbers for more details. This information should be used in conjunction with advice from health care professionals.

I will post more about the genetics later, I am trying to net them out.....and that is really tough.
Posted by Terri at 10:51 AM No comments:

Vote for our Idea to establish FTD Clinics

Please take less than a minute a day during the month of August to vote for our idea to establish FT Clinics and Educate Medical Professionals about this dreaded disease. We are in the running for a $50,000 grant and we need your help.

All you have to do is go to this website and vote once a day for the entire month of August. Also tell all your friends about it, post it to Facebook, Tweet about it etc.

Here is the link, just click on it, and hit the button on the right that says "vote for this idea":
http://www.refresheverything.com/ftdaactivities
Posted by Terri at 7:22 AM 3 comments:

Beginning August 1, I will be working full time for Frontotemporal Disease Association. It is a Texas based non profit organization dedicated to educating healthcare professionals and raising research dollars for neurodegenerative diseases.

Our first event was in 2009, we had a table at the Mind Science Foundation meeting "Bursts of Creativity with FTD" in San Antonio. Dr. Bruce Miller from University of California in San Franscisco was there. It was a great event.

Our second official event was the premier of the documentary "Planning For Hope" in Colorado Springs with Dr. Paul Schulz and Dr. Sara Qualls as special speakers for the evening. The silent auction was a big success. Dr. Schultz purchased Patsy's SHOWGIRL on canvas for his new office.

Our third event is arranging for Dr. Schulz to participate in the Texas Society of Psychiatric Physicians annual meeting this fall.
Posted by Terri at 7:16 PM No comments: 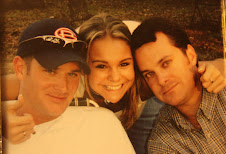 Patsy with her kids when the were teens 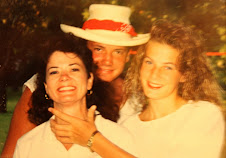 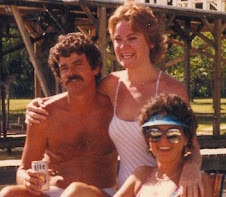 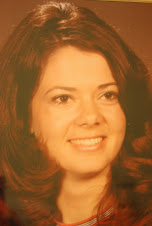